Back from Arizona, it was a tiring but at the same time interesting and rewarding trip.

I made a few new friends. We met for dinner in a quiet Greek restaurant (directions, map), food was great, proprietors friendly and attentive, but that's another story.

While waiting for Kartik, Dave and I talked about this and that, until one of us made a passing remark about the futility and senselessness of the Iraq war. At that time we started to carefully probe the territory, is it safe to say what you really think?

I'm happy to report that both Dave and I are staunch Liberals and we wouldn't mind seeing the imperial troika of George W., Cheney and Rumsfeld being tried for treason, at least in the court of public opinion, for waging a personal war.

But what gets both of us, is how the social and political landscape has changed in this country over the last several decades, how uncivil, polarized and often hateful the public discourse has become. I recalled a podcast in which John Edwards interviews Jimmy Carter. Mr. Carter remarked that in his presidential campaign in 1976 both he and Gerald Ford would refer to each other as nothing less than my distinguished opponent. So what has happened over the last 30+ years that caused our language and our perceptions of each other to roll into the gutter?

I don't really want to start a dissertation here, but let's consider at least one thought: electronic communication channels, like email or this blog, allow people to say things without looking straight into anybody's eyes. On one hand, this is liberating, I can say what I really think and have it published for free. On the other hand, I don't get the instant feedback from my conversers' facial expressions and body language. That instant feedback, this ability of people engaged in informal debates to be close to each other provides moderating effect on how we express our thoughts and how we treat each other.

Some of us live and communicate in a virtual world now, but we are not virtual creatures. We are social beings whose very survival depends on our ability to reach out and touch somebody close. Yet in the virtual world the social norms of behavior are still evolving.

This may be outside of any one individual's or even a group of people influencing ability, but the challenge we're facing is to make sure the virtual norms of social behavior do not stray too far from the ones we have lived by for eons.

The issue is not the content of virtual and real communications, it is the format, which must remain polite and respectful in either case. This has been the norm for as long as I can remember and as far as our historical records go. 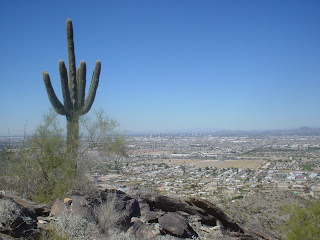 All right, enough of that, let's get back to Arizona. To the left is a picture I took from the Mormon Loop trail in the South Mountain Park, trail map is here. I started the hike from the 24th Street trail head, climbed up, followed the Mormon trail, then switched to National trail and descended back to the parking lot on the Mormon trail. All in all it took almost three hours, largely because of frequent stops to admire the scenery, listen to the birds, look at the rocks, breath the air.

The weather was breathtakingly beautiful, high eighties, light wind, no smog. The "no smog" part was especially captivating, I'm not used to seeing clear air over Phoenix. But last week you could see for miles and miles around.

Posted by Slawomir at 4:52 AM No comments:

Rode my bike in the morning, 45 mins, new record! Beautiful morning it is, sunny, windless and quiet, all you can hear is the freeway several miles away.

The Irish Breakfast tea is a hit, add a spoonful of honey and a slice of lemon and you're set to start a day.

Posted by Slawomir at 9:22 AM No comments: